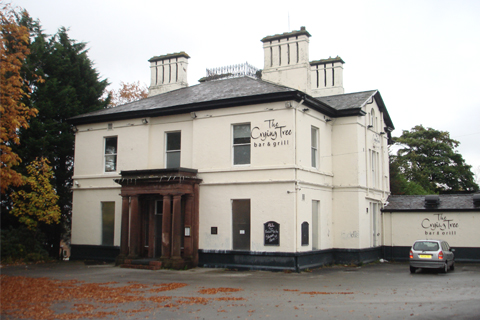 The building, originally a substation family home called the ‘Gorsey Cop’ has latterly been used as a public house and function suite named ‘The Crying Tree’. Substantial demolitions and alterations are now required to restore it to its former glory.

The property first appears in the 1881 census. It was built between then and 1873; the owner being Harold Cunningham, a Manchester cotton broker who lived there. In the 1970s it became a nightclub and the cellar was converted into a casino, changing its name many times over the years. Part of the curtilage  became the site of Acresgate Court flats. In the 1970s the (by then legitimate) casino was acquired by Philippe Overd, the Algerian head chef at Liverpool’s Adelphi Hotel. Gorsey Cop became Chez Philippe, his ‘dream’ French restaurant. It was a popular venue, with Prime Minister Harold Wilson speaking at a function there.

In the 1980s the name changed again, this time to Grange Manor. New owner George Downey installed artworks and stained glass, and turned the stables into the American-themed Penrods bar.  Eventually Enterprise Inns – a subsidiary of Bass Taverns – took over and it became the Crying Tree.

Extensive negotiations with the Local Planning Authority Conservation Officer were required to achieve consent, including a detailed Heritage Statement and a presentation to the Liverpool Planning Committee.

Construction of the scheme is expected to begin in 2018.