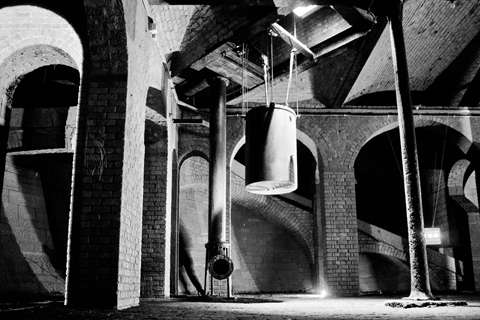 A range of innovative ideas that would breathe new life into one of Liverpool’s historic industrial buildings has been unveiled by Cass Associates as part of the city’s Biennial Independents art exhibition.

Hundreds of people turned out for a rare chance to take a look inside Toxteth’s Grade-II-listed High Park Street Reservoir, which for a week had become home to Echoes, an exhibition designed to showcase the work of local artists’ collective Surface.

Running alongside the art exhibits was a series of posters produced by our architectural team outlining a collection of concept ideas that would not only revitalise this unique landmark building but that would also play a key role in the regeneration of the surrounding area.

We have been working on the project for the past two years in collaboration with leaseholders Dingle 2000 Development Trust. Proposals for this architecturally-important Victorian building have an emphasis on sustainability and regeneration and span both short term and longer-term options including:

With its location at the heart of Toxteth we have been keen to ensure that the Reservoir building is seen as a cornerstone in future plans to improve the surrounding area.  Our masterplan demonstrates how the streetscape could be transformed, with a tree-lined boulevard and the creation of a new public space outside the Reservoir and Town Hall.

Small parcels of derelict and under-used land are incorporated into the Cass Masterplan to be used for new housing, green space and car parking. And with sustainability in mind a new network of attractive pedestrian and cycle routes would run along both sides of the Reservoir, linking with a historic lane which would be restored under these proposals.

Members of the Cass team were available during the Echoes Private View event to discuss their ideas and to answer questions on our proposals. Our recommendations for the building will now be on display for public viewing until the end of November at our  Ropewalks studio.

Partner Richard Cass says: “We are delighted to be working on a project that would hopefully eventually see the transformation of a wonderful building that has such great historical and architectural importance for Liverpool. People were genuinely very interested in our ideas and our display within the main exhibition attracted a great deal of attention. The feedback we had was very positive. ”

“We are very grateful to the Surface art collective for inviting us to participate in their exhibition. As a result of the event we very much hope to have stimulated debate. Everyone would agree that this is a spectacular opportunity, although the key to progress on this is of course funding,” he says.

Built in 1845 during a period when Liverpool was one of the wealthiest and technically advanced cities internationally, the Toxteth Reservoir is one of the earliest examples of public health engineering in the world.  Its blank external walls conceal a spectacular piece of Victorian workmanship, with high vaulted ceilings, a grid of cast iron columns and a series of brick arches, reminiscent of the Albert Dock constructed just a few years earlier.

Empty for the past 15 years, the Echoes exhibition has provided a rare opportunity for the general public to gain access to the building.