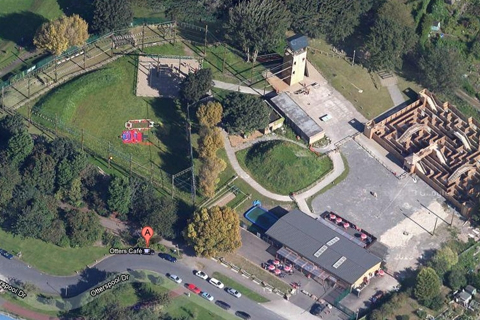 A unique new venture, designed by Cass Associates, has thrown open its doors in Liverpool offering the city’s only large-scale outdoor activity park with café and dining experience.

A uniqSet in an open green space at Otterspool Promenade with views over the Mersey Estuary to the Welsh Hills, the 3-acre Active Adventures attraction has been transformed from a former green waste landfill site to an exciting outdoor experience for all the family as well as a venue for corporate and team building exercises.

The £1.5 million project has been designed by our architectural team who have been involved from the outset and have been responsible for the masterplanning and activity park layout and building design and planning negotiations.

Now open to the public, visitors can attack one of Europe’s largest military style assault courses, enjoy an aerial view of the Mersey on the 52 elements High Ropes, reach the dizzy heights of success on a climbing/abseiling wall and head back down to earth with a 16 metre powerfan that simulates a sky dive. For the extra daring there’s even a duel zip wire!  All under the watchful eye of trained instructors.

For the youngest adventures seekers there’s a wooden maze that includes child-friendly towers and bridges and educational themes intended to encourage youngsters to learn as they play.

The innovative idea came from business partners Keith Perryman and Daniel Kirkham, who are both from fitness and military backgrounds.  Keith, who is 38 and a Royal Marines Physical Training Instructor, has been developing the Active Adventures concept for the last eight years. Having grown up in the area and having worked in the original ice cream kiosk there as a teenager, he realised the site’s potential many years ago and has been determined to follow his dream of creating a special attraction here for families and the local community to enjoy.

From idea to opening, it has taken years of planning coupled with land fill site problems – and at a cost of £1.5 million has been a labour of love and a significant investment.

The new Activity Park is the first in the region to introduce multi activities for all ages on one site, offering a variety of packages to schools, youth groups, corporates and parties. The initial stage of the project, the Otters Café, opened its doors in September 2011 and is already a popular local eaterie. The large café, offering everything from sandwiches to English breakfasts, boasts a delicious range of home made cakes & fresh food.