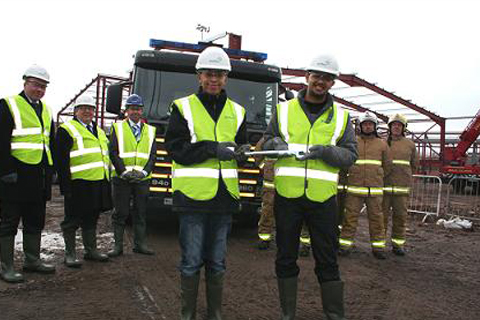 A bolt-tightening ceremony has taken place for a building designed by Cass Associates.

The final metal beams for the new £5.2 million Toxteth Fire Fit Hub are being put in place.

The Hub, which is being built by Wates Construction, will see a state-of-the-art fire station complete with youth, community and sporting facilities built.

Sporting facilities will include new football pitches, martial arts studio, dance studio and a new gym that will introduce the train like a Firefighter concept. It is being built on the corner of Windsor and Upper Warwick Street in the heart of Toxteth.

Construction began in November 2011 and has so far seen 2,061 beams and 6,943 bolts assembled to complete the steel frame for the two-storey combined sports centre and fire station.

Cass Associates’ Partner Richard Roberts said: “Consultations with the local community and particularly with youth groups have been a key element of the project. Priority for all parties has been to create a great building to engage young people in sport, non-sport and community activities in a safe, light, airy and open environment that will make it an all-round appealing place to spend leisure time.”

Large areas of glazing, an atrium with café and an integral courtyard within the building’s interior (designed by Cass’ Landscape Architect team) are all features incorporated by the team to visually open up the building as much as possible.