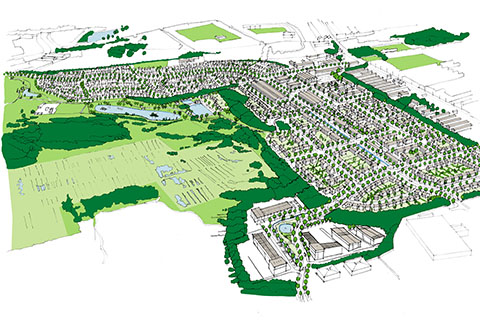 Chancellor Philip Hammond and Communities Secretary Sajid Javid have confirmed the first round of allocations from the £5bn Housing Infrastructure Fund. Bolton Council were the biggest winner in the North West, securing £12m for the roadworks and remediation at Rivington Chase. The first wave of funding, totalling £866m was announced on the 1st of February 2018. An interactive map is available to show all the projects which have received funding.

Cass Associates provided masterplanning and landscape services for the regeneration of the Former Horwich Loco Works, Bolton on behalf of a partnership between the Local Authority and private developers.

The site has outline planning permission for 1,700 new homes and in November 2017 Bellway Homes received permission for 112 dwellings to be built at the entrance to the site — the first phase of the comprehensive masterplan to deliver Rivington Chase.

In addition to the new housing, the site also has permission for 35,000m2 of employment mixed use commercial space and supporting infrastructure.

The £12m funding will be used to remediate land and create a new road across the £262m Rivington Chase development which will enable new homes to be built more quickly. The road will provide the main access to vehicles for Rivington Chase and will link the planned 1,700-home site with Middlebrook retail park, Horwich Parkway railway station and Junction 6 of the M61.

Acting Leader of Bolton Council, Cllr Linda Thomas, said: “This is great news and we always promised we would address local residents’ concerns about access to the site and how any extra vehicles in the area would be catered for.

“We understood that the local community had concerns about highways infrastructure, and we said this would have to be in place before any houses are built.

“The level of investment proposed in the whole scheme will result in major direct financial investment into Horwich, which will benefit both the town and the whole borough.

“Work on the site will also bring hundreds of new jobs for the community.”