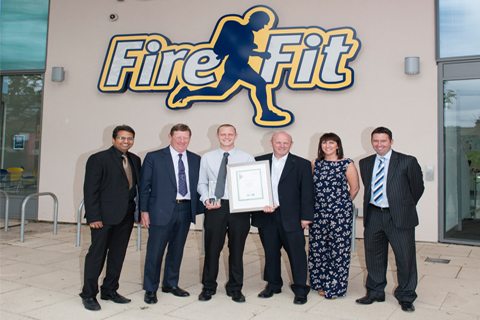 Contractor Wates has picked up its second apprenticeship award in a month for work on Toxteth Fire Fit, a £5.2m fire and community hub designed by Cass Associates.

Sean Millican, 23, from Tuebrook in Liverpool has been awarded the coveted title of Apprentice of the Year by national industry association, the UK Contractors Group (UKCG).

The honor, reserved for the apprentice who has reached the height of excellence in their trade, was awarded to Wates’ Sean Millican after judges were impressed by his enthusiasm and natural aptitude for a career in building.

Sean was appointed by Wates in April 2012 and helped to deliver the Toxteth Fire Fit Hub, which also has a community fire station on site. He received the UKCG award at a ceremony in London.

This is the second award Sean has received in the past month. Alongside fellow apprentice Mohamoud Hersi, Sean received the ‘Young Achiever of the Year’ award at the Centre for Construction Innovation (CCI) North West Regional Construction Awards.

Cass Associates’ Partner Richard Roberts who led the architectural team on the Toxteth Fire Fit project said: “Many congratulations to Sean for this wonderful achievement. To have won the NWRCA award was impressive but to win a second award, and a national one at that, just a few weeks later speaks volumes for Sean’s commitment and also for Wates’ ability to spot potential.”

Tony Shenton, business unit director of Wates Construction in the North West commented: “Nurturing the next generation of construction employees is of paramount importance if we are to ensure the future excellence of our industry. We are fortunate to be blessed with a wealth of talent coming through the ranks and I am delighted to see that Sean’s commitment, hard work and determination have been recognised by UKCG.”

Sean, commented: “It has made my day to receive this award. To be nominated at all makes me really proud but to have won makes this the highest point in my career so far. I’ve really enjoyed every minute of my time with Wates and I’m looking forward to developing my skills with such a brilliant team.”

UKCG launched the first Apprentice of the Year Award and UKCG Employer of the Year Award in 2010. Sponsored by B&CE and CITB-ConstructionSkills, the awards celebrate the talents and successes of apprentices within the construction industry, along with the commitment and support of the UKCG members.

Photos are courtesy of Chris Phillips.