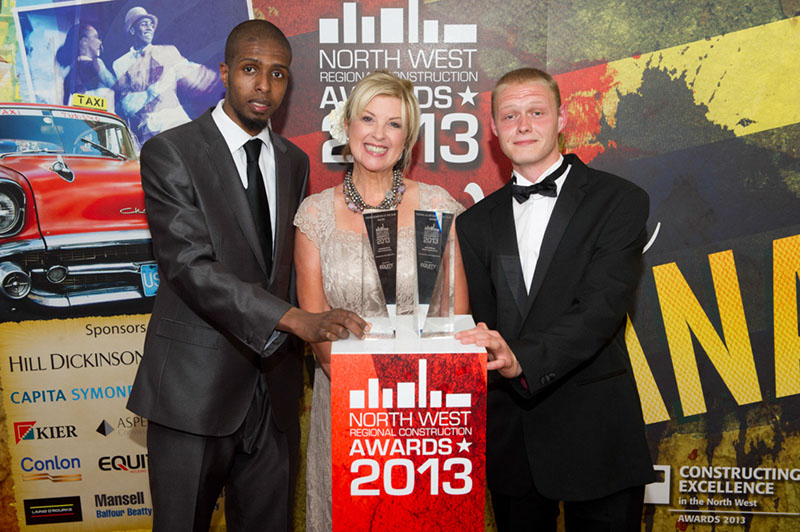 Two Wates apprentices who helped deliver the new £5.2m Toxteth Fire Fit Hub,  designed by Cass Associates,  have been named the joint winners of the title   ‘Young Achiever of the Year‘ at the North West Regional Construction Awards.

Mohamoud Hersi (24) and Sean Millican (23), who both work for Fire Fit lead contractor Wates,  received the joint accolade at the Centre for Construction Innovation’s (CCI) annual awards ceremony at The Palace Hotel in Manchester on Thursday 6 June.

The pair joined Wates at the Merseyside Fire and Rescue facility in April 2012 alongside six further local apprentices recruited to work on site alongside studies for vocational qualifications at Liverpool Community College.  Each completing certificates for NVQ Level 3, Mohamoud from Toxteth and Sean from Tuebrook undertook apprenticeships in Administration and Quantity Surveying respectively. The positions were facilitated by Wates and its Social Enterprise partner, Atom Community Regeneration

Cass Associates Partner Richard Roberts, who attended the awards event, said: “We would like to congratulate Mohamoud and Sean who have clearly stood out as being exemplary apprentices. They have been great ambassadors for Wates  and the Toxteth Fire Fit project and it’s fitting that the importance of apprenticeships in the construction industry should be recognised at the north West Regional Construction Awards.”

Tony Shenton, Business Unit Director for Wates Construction North West, commented: “I am delighted to see that the hard work and dedication of both Sean and Mohamoud has been recognised by the CCI and it gives me great pride that the training opportunities at Toxteth Fire Fit have, as we hoped, made a real difference to the lives of local people. Both Mohamoud and Sean have shown a raw talent and aptitude for very promising careers in construction and I would like to wish them all the luck for the future.”

Sean Millican added: “I’m really grateful to Wates and Atom Community Regeneration for the support they have given me as I begin my career in construction. There is a lot said about the lack of jobs for young people but receiving this award just goes to show what can be achieved when opportunities are created.”

Sean and Mahamoud will now go through to the national finals later this year.