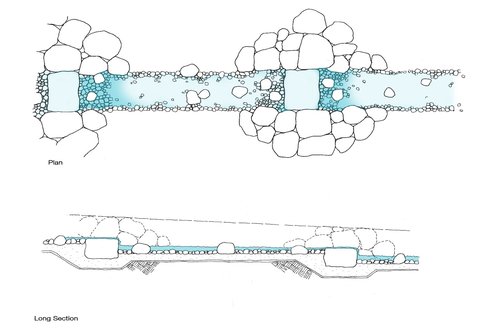 When the Royal Ordnance factory was built in the late 1930s, a number of watercourses were diverted into a network of underground pipes.  As part of the transformation plans for the site, BAE Systems is removing the pipes and diverting the surface water into new channels which mimic the environment of natural rivers.  This is part of the sustainable approach to drainage which is based on reducing flood risk, improving water quality, providing attractive features and creating new habitats for wildlife.  Overall, the aim is to enhance the quality of Dargavel Village for the people that live there and for visitors.

BAE Systems has worked with its landscape architects (Cass Associates) and with Professor Janet Hooke (University of Liverpool) on the design and detailing of the new watercourses at Dargavel Village.  Professor Hooke is an internationally recognised authority on river systems and their conservation.  The outcome is an approach which is based as closely as possible on the natural drainage of the land.

The new river channels will collect water from the more steeply sloping land to the north of Dargavel Village and convey it to existing open watercourses which cross and bisect the site.  At the northern boundary of the development, the water will be diverted through a cascade which drops around six metres to a pool at the base.  The design of the cascade has been particularly challenging.  It is to be constructed using natural stone with the aim of replicating a natural feature.

Beyond the cascade, the water will run in a meandering channel where pools and riffles will recreate the appearance and function of a natural river.

Once the new river system is built, then a rich and diverse landscape will be planted along the length of the new channels.  This will mature and become established to enhance the appearance and bio-diversity qualities of these new features.  In addition, the landscape will incorporate public paths giving the opportunity in the future for residents and visitors to enjoy the new water environment being put in place at Dargavel Village.

Find out more about our landscape architecture services here.